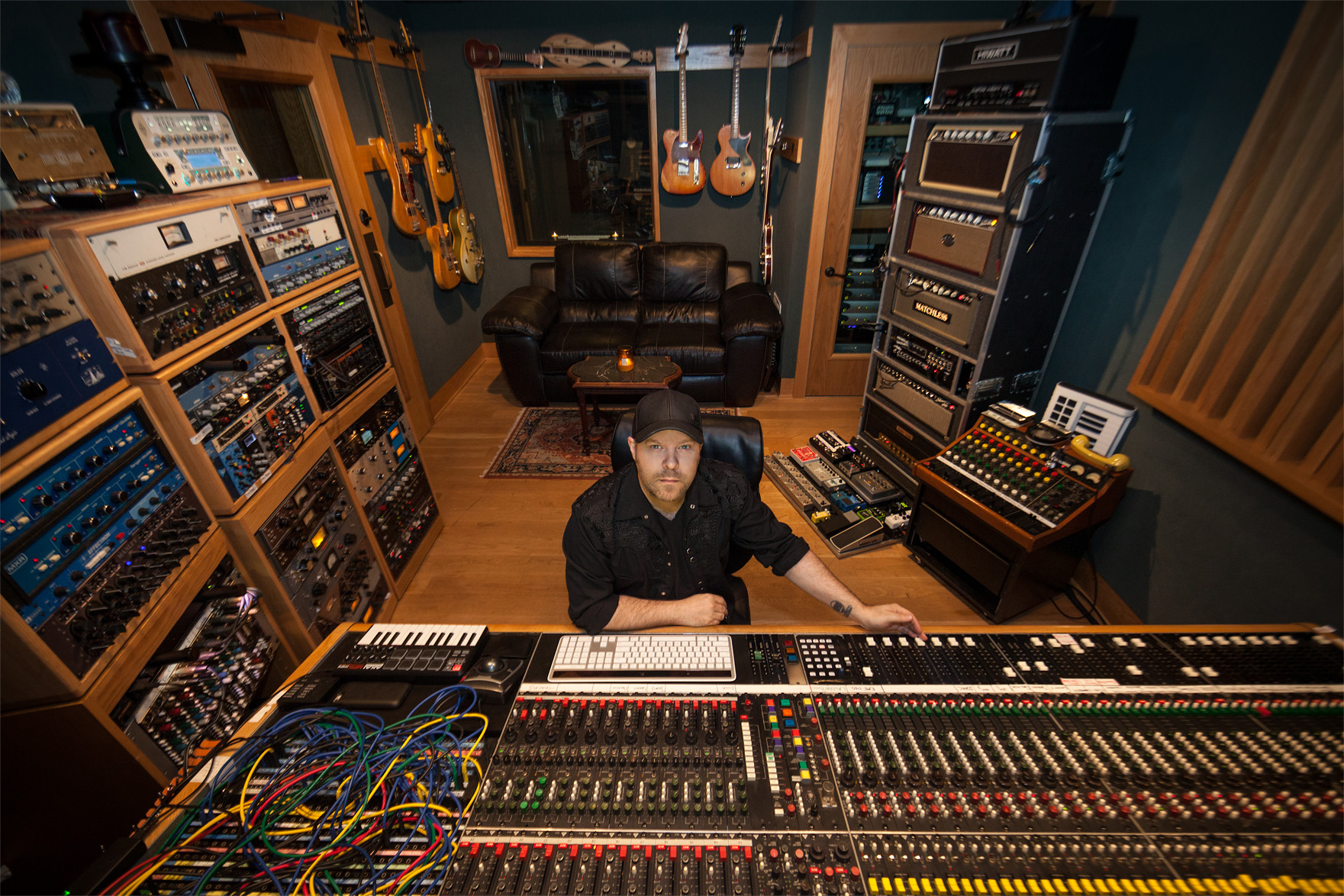 Growing up, David Kalmusky didn’t play with toy cars or action figures like other boys. He played music.

“I grew up in the studio, learning how to splice tape and set up microphones,” he says. “I had a reel-to-reel in my bedroom when I was five years old. I had drum kits and guitars, and I took lessons from all my father’s musician friends.”

His father, Kenny Kalmusky, was one of the original band members of The Hawks in the late 50s. In the late 60s, he made records at Bearsville Studios in Woodstock, NY, and Nashville, TN, with artists like Ian & Sylvia, Todd Rundgren, and Jerry Reed. He had a music studio in the back of their family home in Ontario, where he inspired David’s lifelong audio passion.

Now a multi-platinum, multiple Billboard #1 charting producer, songwriter, musician, engineer, and mixer, David Kalmusky is carrying on his family tradition at Addiction Sound Studios in Nashville. As one of “the most Trident-centric studios on the planet,” Kalmusky and his Addiction partners use a variety of tools from Trident Audio Developments to capture the signature sounds of multi-million selling artists across genres.

Here’s how he integrates vintage gear and cutting-edge digital tools to track and mix a spectrum of hits.

As a young music producer moving from studio to studio from Canada to Nashville, Kalmusky gained exposure to a variety of tools—until he discovered Trident.

“There was a point in my early career where I had a few records on the go in different places. Some were partially mixed, some needed overdubs, some were still in pre-production,” he says. “I ended up booking a studio in town that had an 80B.”

It was there, at Nashville’s Sound Emporium Recording Studios, where Kalmusky first encountered Trident’s revered Series 80B console. “I finished tracking a couple of records on it and did a quick mix,” he says. “I realized that the tracks and mix I did there were the best sounding tracks I’d done in a lot of different studios by a fairly long shot.”

Kalmusky booked that studio often, until he found another 80B in town at County Q Studios. “Not only did I end up tracking and finishing a bunch of records on that Trident,” he says, “but I ended up starting a residency at that studio and renting a mix room on their campus. I spent a couple of years there, cutting all my records on the 80B. That was the beginning of me getting really comfortable on Trident consoles.”

Kalmusky made another valuable family connection while collaborating with a teenage country singer in Nashville named Madison Cain. At the time he was playing guitar and mixing her tracks, he didn’t realize he was working with the daughter of famed Journey keyboardist Jonathan Cain. Meanwhile, Madison brought a mix back home to her father, who quickly came into the studio to meet Kalmusky.

The two musicians hit it off, connecting over Kalmusky’s tattoo commemorating Bearsville Studios, where Cain made his first record in the 70s before his repute with Journey and Bad English. Realizing they loved a lot of the same gear, Kalmusky and Cain started working together, producing music for Journey and solo work for Cain and his daughter.

The duo met with several studio designers to build out their dream space. Along the way, they connected with Chris Huston, a British engineer and producer known for his work with Led Zeppelin and The Who. Together, the three of them built Addiction Sound Studios, which opened in Nashville in 2011.

“We wanted daylight and windows in the studio, and most studio designers told us, ‘No, you can’t do that.’ But Chris’s response was, ‘Let’s build it. We’ll use science and architecture, but then finish it with our ears,’” Kalmusky recalls. 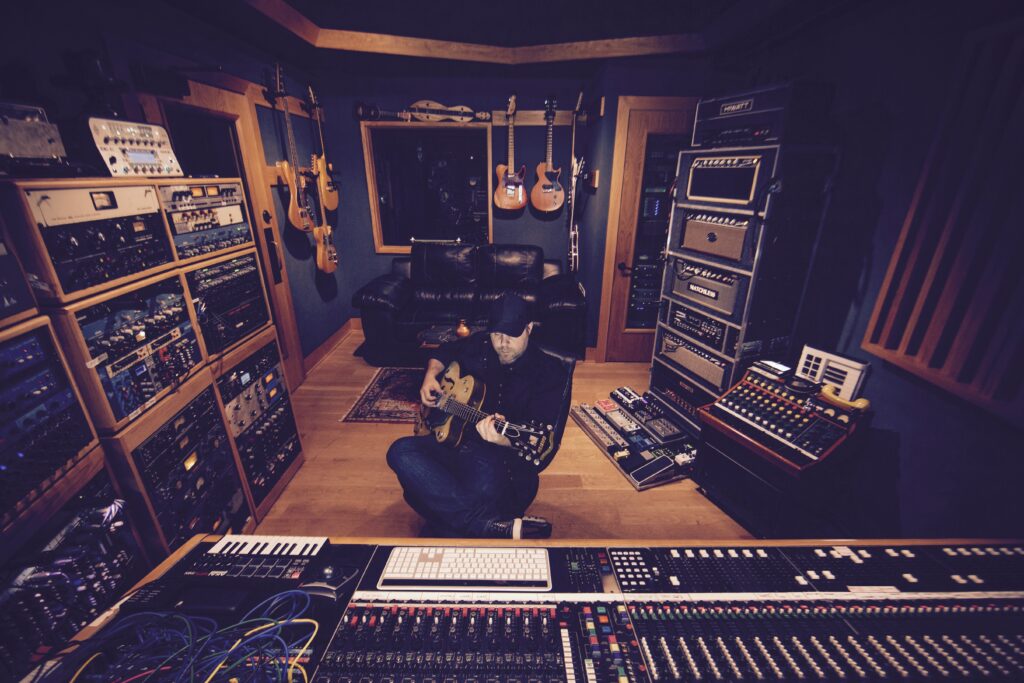 The resulting studio design broke a lot of traditional rules, he says, but created an inspiring space where they would end up mixing hits for a diverse range of accomplished artists.

“We put in four massive windows where we can see the sunshine during the day, and the stars and moon at night,” he says. “I’ve been in studios my whole life, and they’ve all been completely blocked from the outside world like bat caves. I never felt the day come and go, and I never felt connected to anything outside of the studio, and it was exhausting.”

Addiction’s unique design fills the studio with natural light and diurnal vibes that energize the sounds created inside. “I have so much energy here, feeling the day come and go, that I can put in 15 hours and leave here not exhausted,” he says. “The mood of the studio changes throughout the day, so when the natural daylight dims and we start to light the candles, there’s a really different night vibe—almost like a renewal of energy and a new space to be creating in.”

Addiction Sound Studios sets a new model for recording, he says, as more of a creative production workshop than a commercial studio. Loaded with more than 50 vintage guitars from Kalmusky’s collection, drumkits, mics, tons of outboard gear, Jonathan Cain’s Fazioli grand piano, vintage synths including the “Separate Ways Jupiter” and the Wurlitzer that Jonahan Cain & Steve Perry wrote “Open Arms” on, the studio blends the best analog equipment with the most modern digital audio technologies to create an unparalleled hybrid sound.

“It’s been coined the Noah’s Ark of recording because we have a little bit of everything,” he says.

At the center of Addiction’s signature sound sits Trident.

Studio A features the fabled vintage Trident TSM console from The Record Plant in Sausalito, California, which Cain acquired after the legendary studio closed down in 2008. A long list of famous musicians mixed multi-platinum albums on that machine at the Record Plant—including Huey Lewis and The News, Jefferson Starship, Heart, Journey, Mariah Carey, and Metallica. “Lots of great music came through that desk,” Kalmusky says.

Addiction’s Studio B is equipped with another TSM that Kalmusky uses for mixing. “I’ve installed an automation system on this one, and I’ve got my mix room template set up with all my outboard gear inserted,” he says.

Studio C rounds out the trifecta with a Trident Fleximix console, introduced in 1979—the same year as the TSM. Along with Trident’s outboard A-Range equalizer and a stereo compressor from the 70s, Addiction Sound Studios boasts a broad collection of vintage Trident gear—juxtaposed with cutting-edge digital tools, iPads, and modern recording software.

“We’re probably the only studio in the world with three working Trident consoles,” Kalmusky says. “They’re the centerpiece of a very modern studio, and a core part of the sound of the records I’ve been making for the last decade.”

Throughout his career, Kalmusky says he’s cut and mixed thousands of songs on a Trident desk. From rock to country to pop and every genre in between, Trident consoles deliver the versatility he needs to achieve chart-topping success. 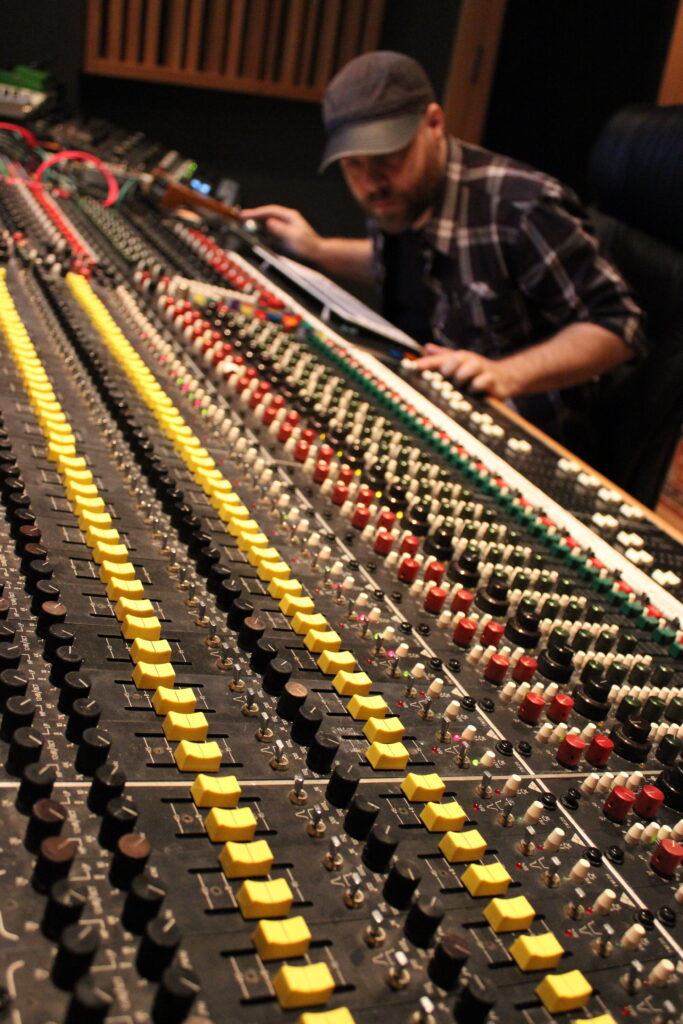 “If you’re going for a really transient, transparent sound, you can totally get it out of the direct outs of the TSM by not engaging the EQs or using buss transformers. It’s a really different sounding console than just bussing it to tape,” he says. “For electronic music and pop, I really don’t need all the analog coloration and saturation, so I wouldn’t consider mixing electronic pop music on other desks that add a ton of harmonics.”

Other times, when he wants a more heavy-hitting impact, Trident still delivers.

“On the very same desk with a rock band, I can literally buss it out and pop in the EQs, and I’ve got tons of color and harmonic saturation,” he says. “I can push these consoles further and more aggressively than any other desk on the planet. What a Neve did for tracking and an SSL previously did for mixing, I have little tastes of all those things in the TSM.”

Although he started his career working on analog gear, Kalmusky says his style has evolved into a hybrid approach that blends the best of both worlds.

“I use as many plugins as I do hardware—maybe even more in my mix template,” he says. “What I look for in plugins is either a good replacement for something analog when I’m working in outside rooms, or a stand-in for hardware that I don’t own.”

For example, Kalmusky uses hardware EQs and lots of dynamics, but he doesn’t own any analog gear that does what Trident’s Tiltration Plugin does. The new tilt EQ plugin combines a saturation processor with digital oversampling to provide harmonic warmth with variable high and low pass filters, giving him unprecedented creative control.

“I don’t own any anything in the analog realm that does that,” he says. “It’s great to add plugins like this that make me feel like I have access to everything in the world, even if I don’t own every piece of hardware. I’m really excited about all of the plugins that Trident is making.”

The combination of vintage gear and cutting-edge digital tools empowers Kalmusky to orchestrate any mood the music calls for. Whether he’s playing guitar, tracking, or mixing, Trident tools play a central role in his creative process—and Kalmusky isn’t the only one who’s noticed the difference Trident tools can make. In fact, it’s part of the reason why artists like Shawn Mendes, Keith Urban, Joe Bonamassa, Motley Crue, Carrie Underwood, Meghan Trainor and Journey have sought Kalmusky’s engineering prowess.

“Over the last decade, I’ve heard jazz legends, rock legends, folk, bluegrass, country, and pop icons openly announce in our studio that it’s the best they’ve ever sounded, whether it’s on an upright bass on a jazz record or a Marshall stack on a heavy rock album,” he says. “Just having the versatility to be able to directly patch it out and keep it fast and transparent, or make it extremely harmonic and colored with the push of a button has really revealed itself to the clients I work with.”