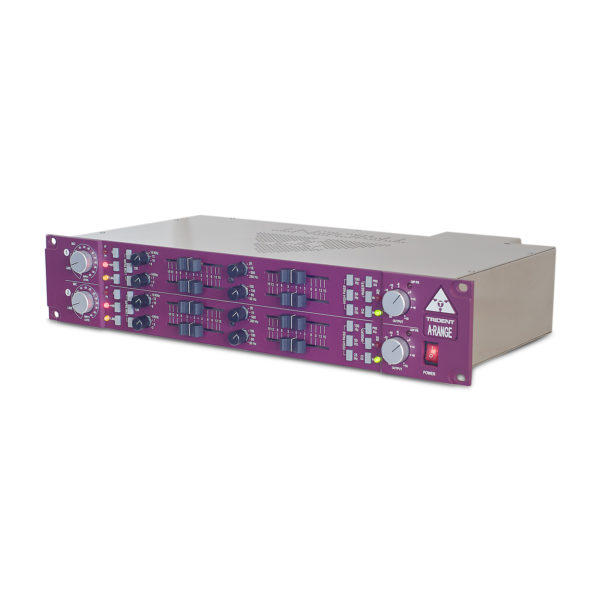 The A-Range is a 2-channel rack-mountable version of the legendary Trident ‘A’ Range console. Comprising two independent channels, each with a microphone/line amplifier and four band equaliser, it is designed to process level instrument and incoming signals from a microphone or line level instrument and output to a recording device, such as a digital audio workstation or analog multi-track tape recorder.

In 1972 Trident Studios decided to buy a new recording console and decided to build one themselves. The first console was designed purely for Trident Studios and was designated the A-Range. It was hand-built to the standards Trident set. In those days, the integrated circuit (or ‘chip’) had not been invented, so all of the circuits used individual transistors (known nowadays as ‘discrete’ design). This and the use of inductors in the lower and upper mid equaliser sections are said to account for much of the unique sound of the A-Range. From this first successful design was born Trident Audio Developments Ltd, which went on to become a leading manufacturer of music recording consoles. One of the company’s earliest advertising slogans was ‘designed by recording engineers for recording engineers’. This became a key component of what made the ‘Trident Sound’ unique.

The 2-channel A-Range rack unit is an exact replica of the original all-discrete transistor circuitry and faithfully follows the original console’s design. So much so that it has taken three years of circuit analysis and testing by PMI Audio Group who undertook the mammoth task of recreating the circuitry. Trident Audio Developments and PMI Audio are extremely pleased and proud to offer this unique piece of recording history. Only thirteen A-Range consoles were ever built and a number are still in use today despite being nearly forty years old. This says a lot about the heritage of these iconic items of recording equipment and the artists that have used them, which include Elton John, Dire Straits, David Bowie, Rod Stewart and Stevie Wonder to name but a few.

Trident was undoubtedly positioned at the pinnacle of UK recording desks during the golden years of rock. Trident’s designs have certainly made an indelible impact on the sound of record making that is nearly impossible to gauge. The desks made for Trident Studios, and other studios fortunate enough to acquire them, were legendary in breakthrough flexibility and huge sound. During this time period, every record made on a Trident desk was uniquely and quite positively altered by the sonic imprint of their distinctive designs.

With only 13 consoles ever built of this model, the Trident A-Range has attained near-mythic status in the professional recording industry—particularly noted for its fantastic preamps and unusual and colorful EQ. It is interesting to note that the original desks all came in the beautiful aubergine (“eggplant”) color, which was ultimately selected by legendary producer Roy Thomas Baker.

The first Trident A-Range console was originally built by and for Trident Studios in 1971. When word spread about this revolutionary new multitrack recording console design, other studios became interested. In 1972, Trident Audio Developments was formed, and consoles were soon delivered. Later orders also started pouring in from America. Cherokee Studios in Los Angeles was an early recipient of one of the first production models, and ultimately purchased four new desks from Trident. David Bowie, Rod Stewart, and Frank Sinatra are among the first artists to record hits on Cherokee’s first A-Range console.

East West Studios, formerly Cello, still operates their original A-Range in Studio 3.
The smallest but arguably the most famous of their studios, the design of Studio 3 has been copied over and over by recording studios across the globe. Some of the most iconic hits of the 60s were born there. The Mamas and the Papas recorded “California Dreaming” and “Monday, Monday” in this studio, along with Scott McKenzie’s classic “San Francisco”. But one album recorded here stands above all the rest – The Beach Boy’s 1966 masterpiece Pet Sounds.

Some of the hits just from Studio Three Include;

With Cameron Crowe documenting the recording sessions for Rolling Stone, David Bowie came to Cherokee Studios in 1975 to record his platinum album Station to Station.

Mötley Crüe recorded the platinum selling albums Theatre of Pain and Shout at the Devil at Cherokee Studios.

Harry Nilsson recorded his final album Flash Harry at Cherokee Studios between 1978 and 1980. Produced by Steve Cropper and engineered by Bruce Robb, the album has a very clean, soulful sound and features a who’s-who of collaborators including Ringo Starr, Paul Stallworth, Eric Idle and Mac Rebennack.

While living in one of the West Hollywood apartment complexes directly behind Cherokee Studios, Bonnie Raitt would pick up backup singing recording gigs with music producers Bruce Robb and Steve Cropper.

Frank Sinatra recorded the Sinatra Christmas Album at Cherokee in 1975.

While he was recording Stop and Smell the Roses at Cherokee Studios in 1980, Ringo Starr invited George Harrison, Paul McCartney and Linda McCartney to guest on the album; Paul McCartney and Harrison also produced some of the tracks. Starr had approached John Lennon to help out as well, had received two demos of songs which eventually wound up on the posthumous Lennon album Milk and Honey, and reportedly, Lennon had agreed to come to Los Angeles in January 1981 and take part in the recording; the album then would have been a modest Beatles reunion. The assassination of Lennon prevented those plans from coming to fruition. Ronnie Wood of the Rolling Stones also collaborated with Starr on the album at Cherokee, adding guitar, bass, saxophone, keyboards, and back-up vocals.

Weird Al Yankovic recorded his first album at Cherokee in 1982. The album sold over 500,000 copies.

In 2002, a terminally ill Warren Zevon came to Cherokee Studios to record what would be his final album, The Wind. Nick Read filmed Zevon’s final recordings at Cherokee for the documentary,Warren Zevon: Keep Me In Your Heart. Bruce Springsteen joined Zevon at Cherokee for the single “Disorder in the House,” Cherokee owner Bruce Robb provided lead guitar on the first track of The Wind and support vocals on two other tracks.

Michael Jackson‘s 1979 album Off the Wall was recorded at Cherokee Studios. The album is among the best-selling albums of all time.

Acts that have recorded at Cherokee Studios also include: 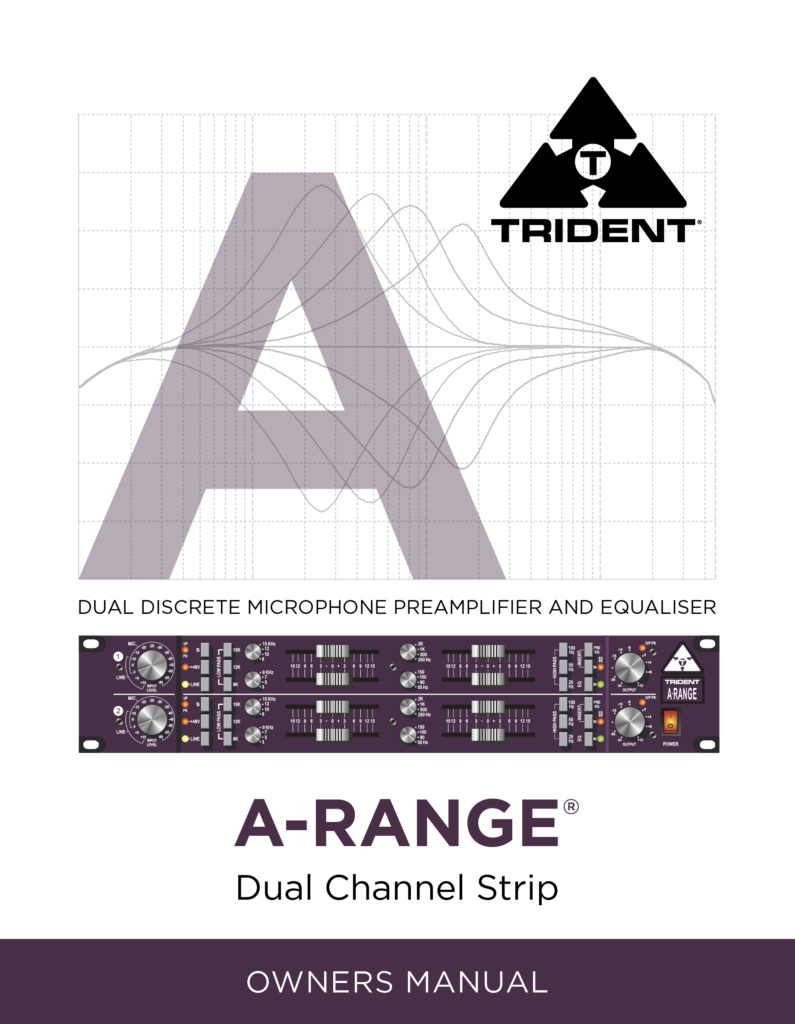 The following outlines the warranty periods for all Trident Analogue electronics. All warranty service requires Proof of Purchase. Proof of purchase is the original Bill of Sale or Sales Invoice from an authorized dealer.

Trident Audio Developments electronics are covered by a limited warranty against defects in materials and workmanship (parts and labor) for a period of One (1) Year from the date the unit is sold to the Dealer or original purchaser only.

The terms and conditions of this limited warranty are:

Any dispute, controversy or claim arising out of or relating to this Agreement shall be decided by arbitration in Los Angeles, California, in accordance with the rules of the American Arbitration Association (the “Association) then in effect. Any award rendered by the Association shall be final, binding and not subject to appeal, and may be enforced by any court of competent jurisdiction.

©2010 PMI Audio GroupFeatures and specifications are subject to change without notice.

A color-coded (red) knob provides controls for loudness compensation within the range of -6 to +6 (cut/boost intensity level). Click the knob and drag up to increase the value and drag down to decrease. Alternatively, double-click on the rotary knob to manually enter a value.

A color-coded (black) knob provides controls for tilt equalization within the range of -6 to +6 (cut/boost intensity level). Click the knob and drag up to increase the value (favoring high frequencies) and drag down to decrease (favoring low frequencies). Alternatively, double-click on the rotary knob to manually enter a value.

A color-coded (green) rotary knob sets the high pass filter slope in dB per octave, within the range of 0 dB/Off (Off=default) to 18 dB. Click the knob and drag up to increase the value and drag down to decrease. Alternatively, double-click on the rotary knob to manually enter a value.

A color-coded (green) rotary knob sets the high pass corner frequency within the range of 100 Hz to 400 Hz. Click the knob and drag up to increase the frequency and drag down to decrease. Alternatively, double-click on the rotary knob to manually enter a value.

A color-coded (green) rotary knob sets the low pass filter slope in dB per octave, within the range of 0 dB/Off (Off=default) to 18 dB. Click the knob and drag up to increase the value and drag down to decrease. Alternatively, double-click on the rotary knob to manually enter a value.

A color-coded (green) rotary knob sets the low pass filter corner frequency within 4 kHz to 15 kHz. Click the knob and drag up to increase the frequency and drag down to decrease. Alternatively, double-click on the rotary knob to manually enter a value.

A color-coded (black) rotary knob sets the saturation enhancement level within the range of 0 (MIN) and 100 (MAX). Click the knob and drag up to increase the value and drag down to decrease. Alternatively, double-click on the rotary knob to manually enter a value.

A color-coded (red) rotary knob sets the output gain level within the range of -16 dB to +16 dB. Click the knob and drag up to increase the value and drag down to decrease. Alternatively, double-click on the rotary knob to manually enter a value.

Use the -8.0 or -18.0 radio buttons above the VU meter to toggle between a 0 VU calibration level of -8.0 dBFS or -18 dBFS respectively. NOTE: Calibration applies to the VU meter only; the PPM meter range is mapped directly to peak values between -20 and +3 dBFS.