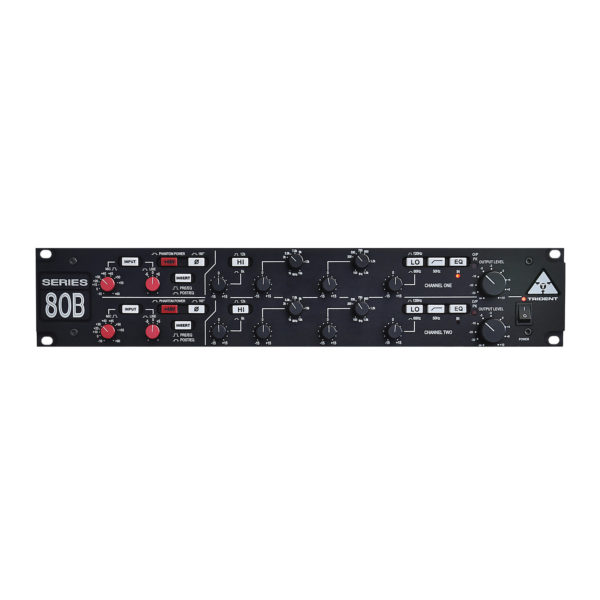 The Series 80B rack unit is derived from the legendary Series 80B Consoles designed by Trident Audio Developments in the late 1970’s. It incorporates an exact replica of the mic preamp and equalizer design that gave the original console its unique sound. These consoles have been used to record just about every major artist in the past three decades, including Elton John, Dire Straits, David Bowie, Rod Stewart and Stevie Wonder to name but a few. More recently they have been used to record artists such as Radiohead and Pavarotti.

The Trident Audio Developments Series 80B rack unit brings with it a historic pedigree and is offered at a price that is now affordable to all studios and home recordists.

The sound and the circuitry of the consoles used to record countless hit records.

In the late ’70s Trident Audio developed a new series of recording consoles to update Trident’s sound for a new generation of musical talent. The result was the Trident Series 80, the sound of which quickly became a favorite among the top artists. The Series 80B doesn’t just capture the sound of these legendary consoles, it is the exact same painstakingly re-created circuitry.

Equipped with preamps that are great for both microphones and outboard gear.

True to the original design the 80B channel strip incorporates transformer coupled microphone preamps designed to achieve professional results from a wide range of sources. Which is why the Series 80 consoles originally were built to handle signal levels from -60dBu to +15dBu. Despite its extreme gain range, the Series 80B preamp sounds amazingly smooth, accommodating a wide range of input levels with a frequency response that extends to above 20kHz – all with near-theoretical-minimum noise performance. It’s the kind of sound quality that’s inspired many engineers and artists to create better-sounding music.

The Series 80B iconic 4-band equalizer lets you tune your sound to perfection.

The Series 80B rack comes equipped with one of Trident’s most sought after 4-band equalizers. Loaded with frequency-switchable high and low shelving sections, as well as sweepable low-mid and high-mid bands and a switchable 50Hz, 12dB per octave filter, the Series 80B gives you an exceptional degree of control over your sound. The Series 80B’s highly resonant Q peaks are particularly favored by many top engineers for tuning instrument tones. There’s no limit to what you can create with this classic channel strip in your rig!

The 68 by design is manufactured to be a more cost-effective variant of the fully modular 78.

All input channels and subgroups are individual boards, faders included, each in an 8 channel pack. The Master Channel is an individual channel separated from all others.

The Series 80B established itself as a world-renowned console not only because of its features but especially because of its EQ. The 80B EQ is considered one of the best EQ’s, especially for rock. As a testament to the consoles, 80B’s still remain in demand and working to this day.

With 27dB of headroom, the 88 is designed to be pushed hard and sound big. This is a hallmark of the series 80 consoles and the 88 carries that tradition forward.

Happy New Year from everyone at Trident Audio Developments #HistoryRefined ...

Happy Holidays from everyone at Trident Audio #HistoryRefined ...